We were recently fortunate enough to receive a beautiful sandpit from Big Game Hunters. The kids have always enjoyed playing in the sandpit at my mum’s house, yet we’ve never got round to getting one for our garden, until now. I decided to make their first introduction to it a little bit different, and set up Pirate Play in there, as Little Man’s been really interested in all things pirate lately, singing the Jake and the Neverland Pirates theme tune a lot!

Items Needed:
An invitation to play – I printed this out from The Big Game Hunters blog, where there’s a whole post on hosting a pirate party, and I then used a tea bag to make it look brown and old, and signed it from Jake.
Pirate dress up
A pirate ship
Telescopes (well, that’ll be kitchen roll holders!)
Spades
Tin foil and/or gold cupcake cases
Treasure! We used some kids jewellery and Little Man’s favourite train

Here’s what I had, ready for the sandpit: 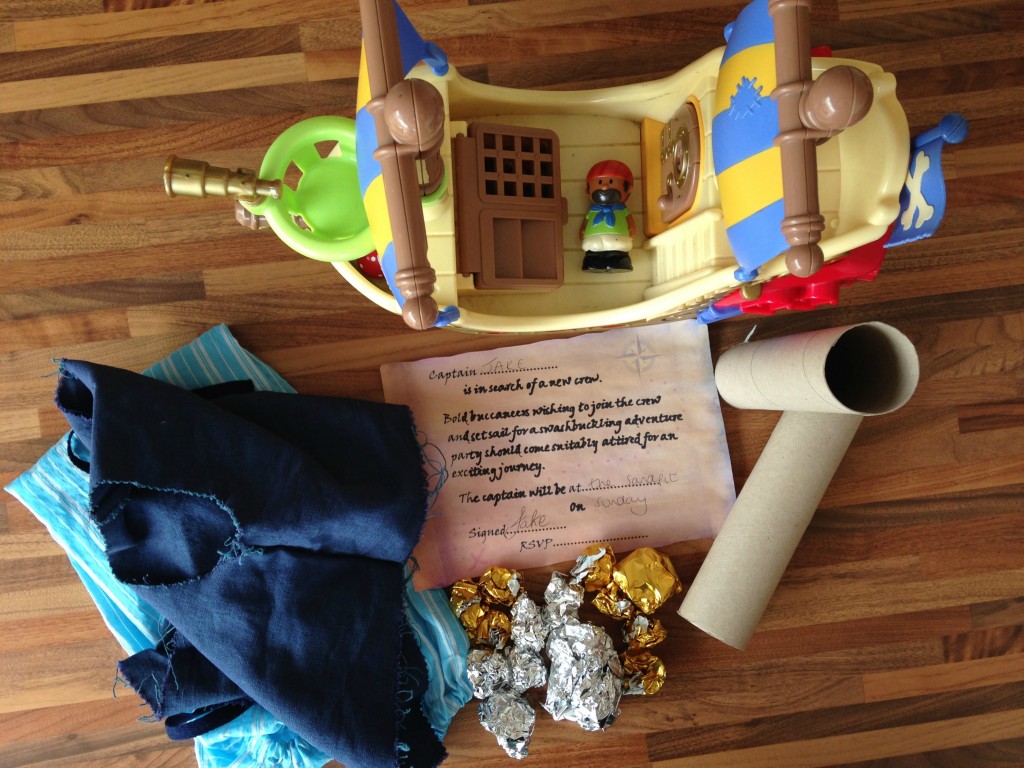 I buried the treasure and set the scene, whilst Little Man was popping on his pirate attire, and Boo got herself a headscarf!

So, all set up, Boo was first on the scene..

Then Little Man Pirate was soon there, so they got to digging for treasure..

It wasn’t long before Boo decided getting in there would be better for digging..

Which meant that Little Man wasn’t far behind, and decided to take his pirate on adventures…

And once all of the treasure was found, the two of them had fun exploring with the texture, scooping, digging, pouring, sprinkling and sailing that ship through the sea of sand!

And as it clearly would, it wound up with them both sat in there, pouring sand over themselves!

It was a great little game to play, and very easy to set up. Boo was particularly enamoured with the hunt, whilst Little Man was more wrapped up in his pirate play. The two of them were very happy in there, and I’d recommend the activity for any little pirates!

Disclosure: We received the sandpit FOC, though all play and post opinions are my own

Along with sharing home, garden and organisation tips, this blog is also home to #BringBackPaper.

The Reading Residence is a participant in the Amazon Services LLC Associates Program, an affiliate advertising program designed to provide a means for sites to earn advertising fees by advertising and linking to Amazon.co.uk/com