On Saturday we got the train down to London for the day. We had been invited by the team over at Kidzania to go along for a visit and I have to say, all four of us were intrigued to see what it was all about.

If you’ve never heard of Kidzania, they explain the concept as…

Imagine a 75,000 sq.ft. child-size City where kids are in charge! KidZania has landed in Westfield London.

Have your kids ever dreamt of becoming a pilot, a firefighter, or the next award-winning singer? Watch the excitement on their faces as they try out more than 60 real life role-play activities in the bank, on stage or fighting crime on the streets as a police officer! Each role-play experience is crafted to teach kids essential life skills including financial literacy, team work and independence.

Designed to empower kids, KidZania gives them the confidence to challenge themselves and inspire them to explore the world of opportunities. KidZania is a real life role play experience for 4-14 year olds, blending learning and reality with entertainment. For younger siblings visiting KidZania, we have a dedicated Early Years area which includes three main activities in our: Science Lab, RightZKeepers Residence and the Kindergarten.

A couple of days before our visit we received more information on what to expect and links to all of the activities available. Little Man and Boo had a good look and were then very, very excited about visiting. A quick train ride down to London and a couple of Tube trains later, and Westfield was in front of us and the kids were ready and eager.

On entering Kidzania, you check in at the flight-desk to take you to Kidzania city. Here you are given wrist bands each, and the adults wrist bands match the children’s so that no child can leave Kidzania with an adult that they did not enter with, an important safety feature. The kids are then given ‘Kidzos’, the currency of Kidzania and hair nets that are needed for any food preparation or surgical activities. In our case, I kept hold of their money, but I can see that for older kids this is all an important part of the experience, as they take responsibility for it themselves, as well as working or training their way around the city.

Here’s a little street view for you, just one part of Kidzania…

It’s a city that the kids run, and to be honest, adults are just in the way. Each establishment is just for children, so they work in the fire station, the vault, the supermarket, the burger kitchen, the dentists, the stadium, the beauty salon, the radio station – oh, there are so many! As parents, we are not allowed to go inside any of these buildings or get to hear the goings-on and the children go into each activity without us as we look on from outside.

On booking into Kidzania, you are allotted a four hour visit, which should allow children to take part in around 4-6 activities. There are queues for some of them, and the duration of each one is clearly detailed outside along with the job description and salary, if applicable. They also have a maximum number of participants, usually around 6-8, so every child gets plenty of attention and it’s not overlooked or overwhelming for them. Generally speaking, they each take 10-15 minutes, though there are some such as the dance academy and theatre that can last a little longer.

In some cases, there’s a fee charged to participate, so kids can choose to spend their kidzos in the city, too. For example, Boo and Little Man chose to go into the Innocent smoothie shop and learn how to make smoothies, coming out with a smoothie each. Kidzos well-spent! Another aspect that I enjoyed was seeing the kids in their hairnets that they often forgot they were wearng – so cute!

Little Man and Boo went round the city together, and in the nearly four hours that we were there, they worked in a recycling plant and learned how to make paper, looked after babies in the special care unit, went on patrol as police officers, visited the Innocent smoothie shop, learned how to make ice cream with Walls, took on surgery in the hospital, opened their own accounts at the bank and received a bank card each, then spent their hard-earned cash in the department store just before leaving – and no, adults can’t go in there either so they can choose whatever they like with no interference! 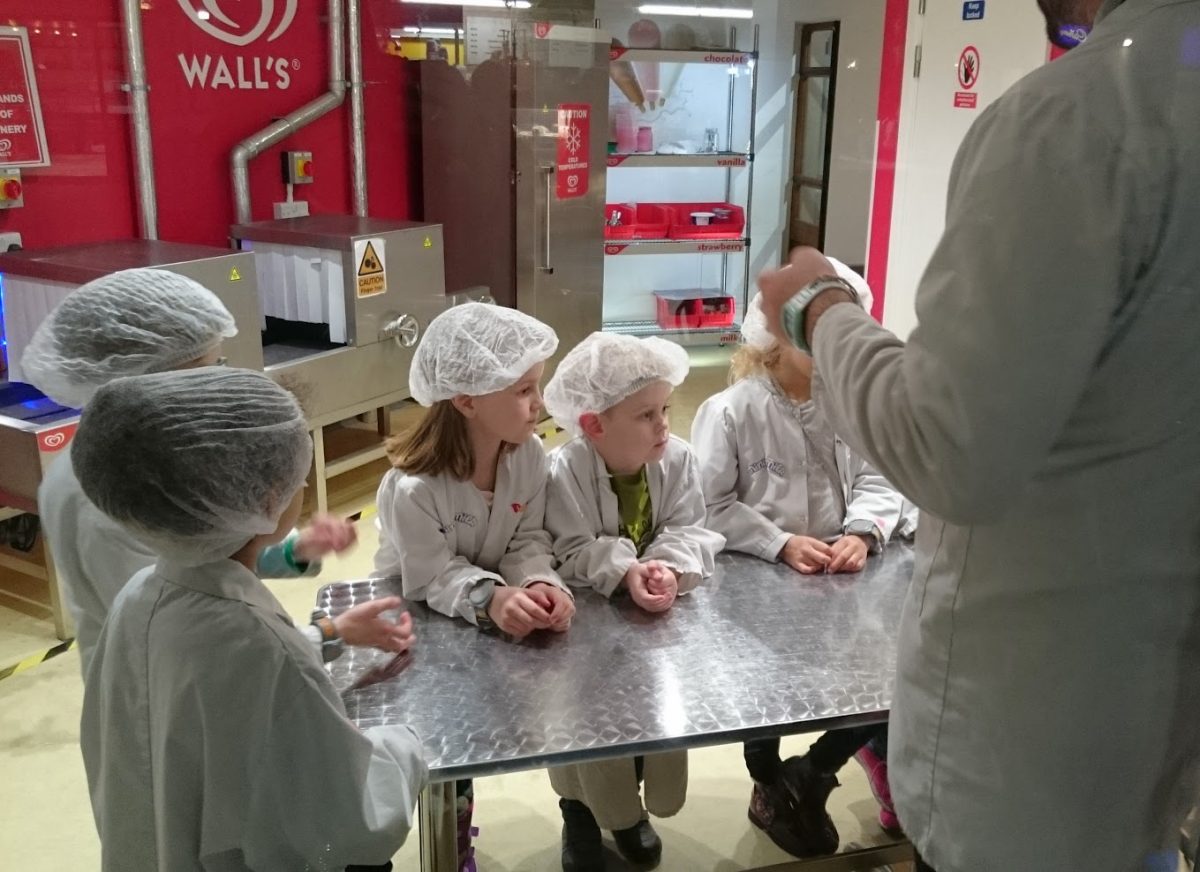 Both kids were comfortable walking around and exploring the city and enjoyed choosing each of their activities. In every case they had to put on some sort of work wear, whether it be a high-vis vest, a police officer’s helmet, an overall or scrubs, and I think that made them feel very grown up. They were then both totally entranced and concentrated on all that they were being taught and asked to do. Little Man tells me that if a baby’s bottom is sore you have to put cream on it, so he took that part in! They absolutely loved getting paid after each job and I couldn’t help but notice that Little Man seemed to be first in the queue for this practically every time!

Boo was so looking forward to visiting and she was not disappointed. At 7, she’s a great age for this as she was happy to join in with everything and clearly understood what she was doing. Little Man at 4 is not especially confident and was amongst the youngest there as Kidzania is for 4-14 year olds, yet he went in and enjoyed every single activity and tells me he loved it all. He did of course have his big sister with him which I’m sure helped, but I was still impressed with how much he threw himself into it all. He does tend to tire of activities after a short while, but it wasn’t until we were nearing the end of our four hours there that he told me he was ready to go, which is something of a record I think for him! Both kids were just buzzing throughout the afternoon and are still talking about it.

From an adult’s point of view, you need to be prepared that this is all about the kids. You will spend a few hours just standing around whilst they have fun, but then I’d say with playgrounds, parties and soft play, we are pretty well conditioned to do that anyway! For children aged 8 and over, you can just drop them off and go shopping in Westfield. If you’re happy to, there’s also a Parents Room to relax in, though we didn’t try this as we followed our two around. They had quite a few parties on and groups there, and I can see how hugely educational this experience is, as well as a lot of fun and a very different way for kids to spend an afternoon.

It was definitely worth the trip down to London to visit, but that said, I am glad we don’t live near as I suspect the kids would have us there every weekend!

Disclosure: We received entry FOC for the purposes of this post, but all words and opinions remain my own.